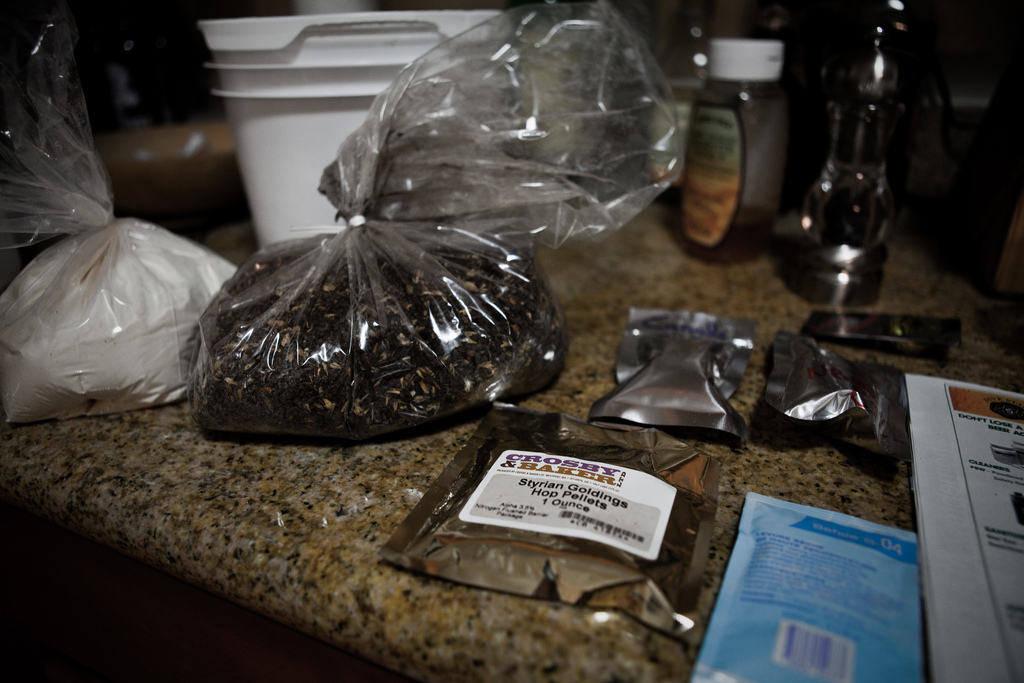 My goal with each new batch of beer is to do something I’ve never done before. I use this experimentation as a way explore and learn about the world of beer and brewing. There are usually several new things that I introduce each time I brew, but overall I try to limit the variables to a small extent in order to help me understand the role that each one plays. In this case, I’m trying out a new style. Also, I’m working with both LME and DME in a single batch. While I’ve worked with each on their own, I’ve never combined them. It shouldn’t really be a big difference, but it’s still a new variable.

This particular recipe comes from the replicator column in the December 2009 issue of Brew Your Own magazine. It’s a clone of Great Lakes Brewing Co’s Edmund Fitzgerald Porter. This is a small regional brewer located in Cleveland, Ohio. I’ve never actually had the original and have never seen it distributed on the west coast or even anywhere west of the Mississippi. I chose this recipe based only on my recent interest in the porter style. I can only judge the results against my experience with other porters and not whether it stacks up as a successful clone.

I’ve quickly found out that my LHBS introduces yet another unforeseen factor into the mix as well. They’re a very small shop with limited space for warehousing the vast array of ingredients that recipes can call for. As a result, ingredient substitutions are sometimes necessary. In this case, I’ve been forced to substitute Safale 04 as the yeast and Styrian Goldings in place of the Fuggle. Additionally – though probably less notable – I used a generic pale LME rather than the Coopers branded light extract. I’m not entirely sure about the exact name or brand sold at my particular shop. They simply measure requested quantities out into 1 gallon buckets from a much larger unmarked 55 gallon barrel.

*One final deviation I’ve made to my version is to use late extract addition and with the DME. This leads to a slightly higher IBU due to greater hop utilization. It could also potentially reduce the effects of extract caramelization which include a higher SRM (darker color) and off tastes. In the case of a dark beer such as a porter, these aren’t significant issues anyway.

With two batches now under my belt, I’m beginning to feel a bit of confidence in the basic processes. There are three simple tenets to the mise en place of the brew session – sanitizing, cooking water, and measuring hops. Anything that touches the wort after the boil must be properly sanitized. Since this is a partial boil extract recipe, additional top off water must be first boiled and set aside to cool. More water must be heated both for steeping and rinsing grains. Finally, the hops additions need to be measured out for adding during the boil as well.

Everything seems to be going smoothly. Then, disaster strikes. Knowing the risk of burning undissolved extracts, I’ve made sure to turn off the stove’s burner while the malt extract is poured and mixed into the kettle. Regardless, I’ve still somehow managed to burn it. Either my boil is too vigorous or the extract just isn’t fully dissolved before turning the burners back on. Large black flecks begin to circulate in the boil. I’m not sure exactly what has gone wrong, but what resemble large flakes of peeling paint are threatening to ruin my brew. I try to reduce the damage by lowering the heat while still maintaining a boil and using the brew spoon to attempt to collect and fish out these burnt extract confetti bits throughout the hour long boil. My only hope is that anything I can’t manage to get out of the wort is going to settle out into the trub during fermentation. It’s a gamble, but the only choice I have given my limited experience and resources.

Had this been another style, the problems during the brewing session could have been much more devastating. Luckily, any off or burnt flavors or darker color produced from the scorched extract are able to blend well with the porter style. Additionally, the material has mostly settled into the trub and been removed from the final bottled product. Having prepared a yeast starter instead of simply relying on un-rehydrated dry yeast might have also increased attenuation and helped to get closer to the expected final gravity.

Despite these shortcomings, after priming and bottle conditioning it still ends up being great beer. It might not be anything resembling a proper clone of its namesake, but I don’t much care. Successful recipe cloning and reproduction may certainly be a display of technical brewing expertise. I’ve taken a slightly different path here. Using one interpretation of an existing successful commercial recipe I’m continuing to follow the ethos of the craft and homebrew worlds and created something that is my own.