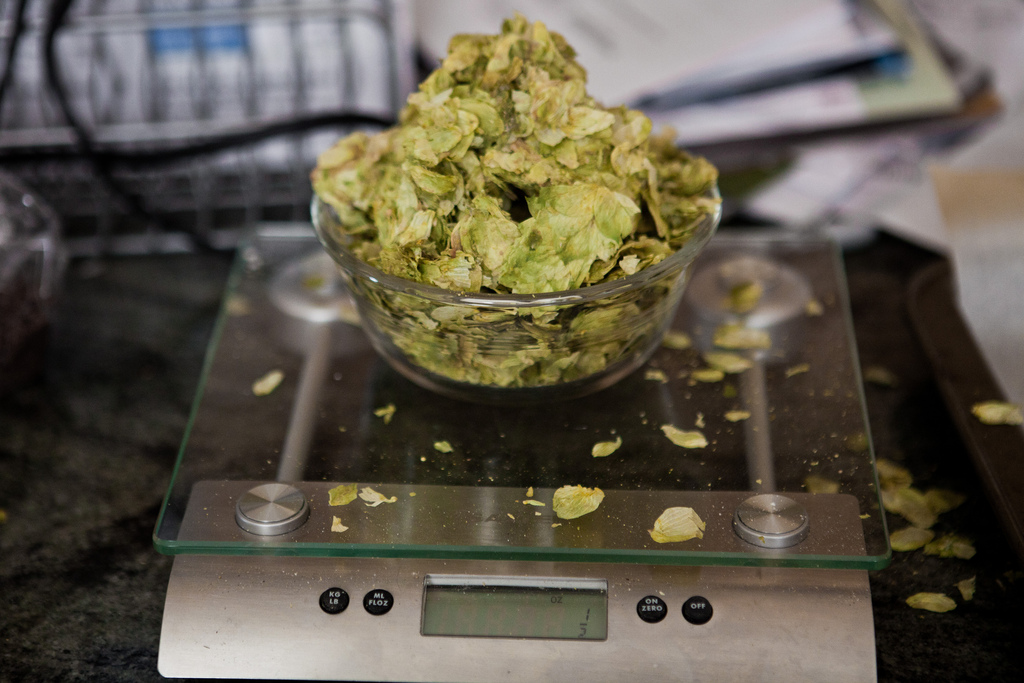 The brewing process for me often starts with a simple concept or core thematic element. It could be an ingredient, a style, or some other idea serving as the inspiration for the beer. In this case a recent thread in the HBT forums brought up the idea of an end of the world brew.

According to some interpretations of the Mayan calendar the world is set to end on December, 23rd 2012. This would be a perfect opportunity for a commemorative beer to celebrate the occasion. Following along with the forum thread, I’d start with an imperial stout and then age it with chile peppers and cacao nibs.

The mash consists of 24 pounds of grain and 7 gallons of water. This is the biggest brew I’ve done to date, pushing the limits of my ten gallon mash tun. With such a large beer it seemed like the perfect opportutunity to try another partigyle. My goal was to collect enough additional runnings for a second 2.5 gallon batch of porter. The primary batch should have a target original gravity of around 1.110 while the smaller batch would start around 1.045.

This would be a busy brew day. Not only did I have two boils planned, I also had two batches that needed to be transferred in order to make room for this new set. The Gun Stock Ale needed to be racked off the oak cubes it had been aging on for the last few months. The Belgian also needed to be transfered into a secondary fermenter. Plus I needed to plan ahead enough to create a yeast starter the day before. Once all of the prep work was out of they way, I would be ready to start brewing.

As luck would have it, I once again ran out of propane partway through. This time it caught me as I was heating the initial strike water. Running out of gas has become a nearly constant concern since moving out of the kitchen and trading P.G.&E.’s unlimited supply with a fixed volume of available propane. After a few sessions on a fresh tank, I start to worry about whether I’ll make it through the entire brew session without running out of gas.

It would probably be a good idea to invest inn a backup tank to have on hand for these situations. For now – once again – Jennie saved the day and drove us to the station for a quick exchange of my empty tank for a full bottle.

I dubbed the second beer of the batch “Rapture”. The O.G. came in at 1.059 after boiling down the 2.75 gallons of initial wort. It went into a keg for force carbonation after seven weeks with an F.G. of 1.013.

After five weeks in primary, it was time to transfer to secondary for additional aging. The secondary phase is where this recipe begins to take a significant divergence from the original. I started by roasting two habanero peppers over an open flame on the stove. Next, I chopped the peppers up into eighths, discarding the stems, but keeping the seeds and ribs. I also sliced up a few dried guajillo peppers into similar sized pieces. While the habaneros would provide the backbone of the heat, these extra mild peppers would hopefully add more complexity to the chile flavors. All of the peppers with about a cup of water – just enough to cover them – went into a pan where they were heated up to a boil and allowed to simmer for a few minutes. This would re-hydrate the dried peppers and sterilize everything reducing the risk of infection when adding them to the already fermenting beer.

Finally, the peppers and water were dumped into the secondary bucket along with 3 ounces of roasted cacao nibs. The beer was then racked on top of this. Since this brew is expected to have a long shelf life, I also decided to include an additional dry hopping with another half ounce of leftover whole leaf Willamette hops. I want this beer to still have some of its hoppy character after it’s been in a bottle for a year. Hopefully this last hop addition will push it over the finish line.

Since I planned on keeping bottles of this beer around for quite a while and wanted to give out some as special gifts to friends, I wanted to do something special with the packaging. I decided that belgian bottles with corks and wire cages would offer a nice presentation. So, I saved up suitable bottles and invested in a new Italian floor corker. The device resembles some sort of medieval torture device, but is actually a very convenient way to cork bottles. After inserting the cork, a wire cage can be affixed by using a pen or pencil to tighten the cage in place. Once the bottles are sealed, they are stored on their sides to keep the cork from drying out.

The Recipe is based on a standard simple single infusion all-grain mash using modern well modified grains. The values are calculated based on an average 70-80% brewhouse efficiency, so your values may change depending on your system capabilities.

I’ve tried partigyles several times before. The concept is always the same – make a smaller beer from grains of a bigger beer. I’ve never had a lot of luck with the results of the smaller beer. It can be difficult to plan ahead when designing a partigyle. A lot is up to what happens on the brew day. The partigyle runnings you end up with are whatever is left over that you can extract from your grain after the first beer. To be the most successful, you need to be able to take measurements throughout the process and make on the fly adjustments. It might be necessary to collect more runnings than you first plan for or to adjust your boil to hit the post boil gravity that you’re after. No matter what, you’re probably going to be winging it a fair bit. Plus, you’re going to be pushing every last bit out of your grains. There’s a big risk of extracting unwanted tannins and other undesirable flavor contributors at this point.

The smaller beer from this brew turned out to be the first vaguely drinkable partigyle that I’ve done so far. It comes off as a little bit funky to me, but others who have tasted it have commented favorably on it. It could be that the faults I find in it are simply due to not enough aging though I suspect it may have been unwanted tannin extraction from the mash. All in all, I’d call it a success. It’s also a nice filler until the apocalypse is finally at hand.

As for the primary beer, I’m extremely pleased with how it came out. I first worried that the heat would be too much, but I think for now it’s just right. The heat comes in very nicely at the end when tasting without being completely overpowering. I just hope that it doesn’t mellow out too much as it continues to age. I’m not sure how much of the cacao actually ended up coming through in the final product either. There are definite chocolate notes, but I’m not sure how much is attributed to the grain versus the cacao. It might be interesting to experiment with these sorts of additions more in the future. No matter what, this is a beer which again taught me a lot along the way.