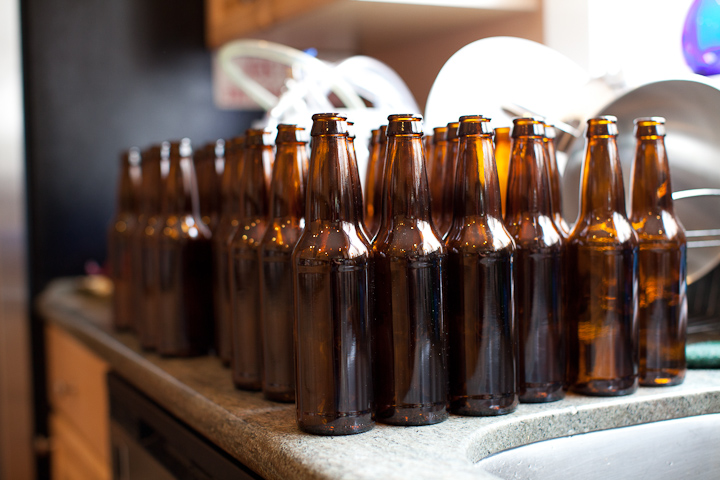 Most of the time involved in beer making is a hands off process as the yeast does its work.  A comparatively small portion of time is actively spent on preparing the yeast, wort and, later on, packaging the resulting beer.  A good deal of any brewer’s hands on time is dedicated to cleaning and sanitizing tasks.  So what is the difference between the two processes and when is each appropriate?

The process of cleaning refers only to removing surface debris from equipment.  Sanitizing is the process of killing bacteria and other unwanted microbes residing on those equipment surfaces.  It is important that any surface that will be sanitized is cleaned beforehand.  Uncleaned surfaces with built up debris offer nooks and crannies that sanitizing solutions won’t be able to reach.  These hidden areas can provide safe havens where beer spoilage organisms to build up their numbers to ruin your brew.

A sanitized surface is not the same as one which has been sterilized.  Sterilization represents a much higher standard than simple sanitization.  Sanitizing only kills a percentage of microbes while sterilization will kill almost all of them.  This high standard is not really necessary in the process of home beer making.  Maintaining a sterile environment is also impractical in most home settings.  Only enough contaminants need to be removed in order to give the yeast a competitive advantage.  Once yeast have built up their numbers and fed on the nutrients in the wort,  the resulting alcohol levels and pH will create an unfriendly environment for the survival of most competitors.

Knowing the difference between cleaning and sanitizing, when should each be performed?  The brewery can generally broken down into two categories – the cold side and the hot side.  The hot side refers to any part of the brewery that comes into contact with wort during the brew day up until the end of the boil.  The cold side applies to everything after the wort has been chilled down below 140F.  This distinction is important because equipment on the hot side only requires cleaning while everything on the cold side must be both cleaned and sanitized.

The hot side of the brewery includes the boil kettle, mash tun, hot liquor tank, most wort chillers, pumps, and any plumbing or hoses connecting the systems together.  Extra sanitization of these parts is not necessary since any contaminants will be killed when the wort is boiled.  For example, placing an immersion chiller in boiling wort for the last 15 minutes of the boil will sanitize the exterior of the chiller.  The interiors of counterflow or plate chillers and transfer hoses can be sanitized by recirculating near-boiling wort through them near the end of the boil as well.

While boiling wort takes care of the majority of hot side sanitization, it is still important to keep all of these parts cleaned of any debris that could cause off flavors during wort production.  Special care should be paid to any parts where standing water could get trapped after cleaning.  These areas can become perfect locations for hidden mold and bacteria to grow between brewing sessions.  Since plate chillers can be especially prone to clogging or catching solid material it is especially important to routinely backflush them after use.  Hoses should always be properly hung up to dry.  Compressed air or a shop vac with a blower can also be helpful at clearing out leftover water.

The cold side of the brewery equipment includes fermenters, siphons, kegs, bottles, theifs, transfer and blow-off tubing, airlocks, stoppers, and bottling devices.  Anything that might come into contact with the wort between the time it is chilled from the boil kettle and the time it finally reaches a beer glass falls into this category.

With no boiling hot wort touching the parts on the cold side, other agents must be applied to perform sanitizing duties.  There are a range of options available including both rinse and no-rinse solutions.  These differ in whether the sanitizing agent must be rinsed off with water after it is applied.  The danger with these is that the rinse water has the potential to recontaminate the sanitized surfaces.  There is also a risk that potentially hazardous chemical sanitizers are not thoroughly rinsed off.  Due to these issues, no-rinse options are often preferred.

Even though many microorganisms will not be able to tolerate or thrive in the harsh alcoholic environment created by finished beer, there are still some which could cause problems.  Brettanomyces, acetobacter, and other wild “gusher bugs” are just a few of the potential uninvited spoilers that could come to ruin an otherwise good batch of beer.  Even though poor sanitization still has the potential to produce immediately drinkable beer, slow working spoilage organisms can present problems in aged beer over time.   It is for this reason that proper cleaning and sanitization practices are critical to the result of quality shelf stable beer.