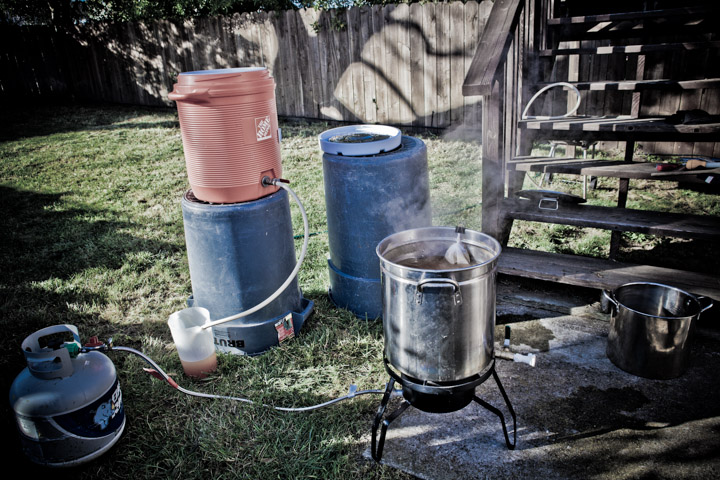 The average all grain brew day generally takes between 4 and 6 hours from beginning to end.  Some of the steps have a fixed duration.  A 60 minute boil will never take any less time than an hour to complete.  There’s no way around that fact.  However, there are other areas with the potential to optimize and speed up the brew day.

When you optimize your own brew day look for ways not only to shorten the overall time spent brewing, but also to extract the most value from that time.  After all, a shorter brew day might not necessarily equal a better brew day.  Here are just a few quick ideas to get started.

The French phrase “mise en place” translates into English as “everything in place”.  It is a common term used in the cooking world which refers to having all of the ingredients for a meal measured out, cut and prepared for use prior to actually starting to cook.  This same technique can be applied in the brewery.  Grains, hops, water chemicals and other brew day additives can all be measured out on the night before the brew day.  The grain can also be crushed at this time if necessary.

Having everything measured and laid out beforehand helps streamline the process and also provides additional insurance to make sure nothing is missing before it is needed.  If the recipe calls for brewing salts in the sparge water or fining agents at the end of the boil, they can be measured out and accounted for.  It’s much easier to react to shortages the night before than to discover something missing and have to scramble after the brewing process is well under way.

During the brew day there a number of breaks between steps in the process.  Sure, you could kick back and relax while you’re waiting for the mash to finish or for something to heat up to its target temperature.  However, these idle periods can also be used to clean up the mess from prior steps and prepare for the next steps.  Waiting for the the next boil hop addition?  Spend that time cleaning the mash tun or sanitizing fermenters to be filled.  In general, as you progress through the brew day you should be cleaning up as you go.  If you follow the motto of “clean early and often” then by the end of the brew day there shouldn’t be much of a mess left to deal with.

Optimizing your time is not just about spending less time.  It also means getting the most out it.  One way to do that is to just brew a larger quantity of beer.  Fortunately, increased volume does not always equal increased time.  Generally it takes about as long to brew whether its to produce 1, 3, 5, or 10 gallons.

Brewing a larger target volume won’t shorten a single brew day, but if one day is all the time you have then you’ll at least get more out of it.  As a bonus, working with a larger volume can open up a wide range of creative options.  A 5 gallon batch could be split into five 1 gallon batches or a 10 gallon batch could become two 5 gallon batches.  Experimenting with different yeasts, dry hops or other additives split between them can keep things interesting and provide a great way to learn how each affects the base wort profile.

Even when not brewing multiple beers, the concept of performing some steps in parallel can still be useful for speeding up the brew day.  Sparge water can be heated up while mashing so it is ready as soon as the mash is finished.  The boil kettle can be heated as soon as the first wort has been drawn off during sparging.  Depending on the sparging technique, the wort may already be reaching boil at the same time as the sparge is completed.

There are times when some steps can be significantly shortened or even completely omitted.  Some brewers advocate a no chill method where after boiling the wort is racked directly into a container without passing it through a chiller.  The wort is then left to cool over an extended period of time until it reaches pitching temperature.  Skipping the chilling step can save time during the active brew day and conserve the water resources required for chilling.  However, there is debate on potential downsides to this approach such as the lack of cold break, DMS formation, and the extended time that the wort spends in a temperature range most susceptible to bacterial infection.

There are other times where the boil step can be drastically shortened.  Boiling the wort sanitizes it and provides the conditions necessary for the isomerization processes that extract hop bitterness.  It can also be useful to concentrate the wort to make it stronger or caramelize and add color to it.  For a light beer style like Berliner Weisse requiring minimal bitterness, a quick 10 minute boil to sanitize the wort may be all that is necessary.